The school age children have been provided with many different science experiments that explore chemical reactions. They love to create their own hypothesis and closely observe the cause and effect of when certain substances mix together.

During this experiment the items provided were water, sand, cornstarch, and soap. When seeing these items, the children were confused about what activity was in store for them. They used their observation skills and guessed what they were going to do next. Nathan asked very excitedly, “Are we going to do a vinegar and baking soda explosion?” When asked why, Nathan responded, that he saw baking soda in one of the containers.

After the children were told that they will be creating kinetic sand, they were excited yet confused at the same time. Avery asked, “How do we make kinetic sand out of these things?” The educator explained that each ingredient presented to them would play a significant role in creating the perfect consistency for the end result.

To start the activity, the children took turns putting the cornstarch into the sand. While mixing it, Olivia said, “Wow, it’s very dusty!” Stella suggested they should add some water to help. After adding the water, the children did not hesitate to mix it up with their hands. They loved this part as they knew they would get messy. With this, the children became aware of what role the water played in the mixture.

Kristen came over to investigate, asking what the group was doing. The children happily responded, telling her that they were making kinetic sand. Kristen acknowledged that cornstarch combined with water makes a solid/liquid effect. This triggered the children’s memories, relating back to our previous goop activity, which was created with water and cornstarch. By reflecting upon previous activities, this allowed the children to create accurate hypothesis of what role each substance had in the kinetic sand.

The next and final step was to add soap. The children were asked what they thought the soap would do to the mixture. Stella, who loves to make slime, said the soap makes it “more fluffy”. She knew this due to her previous experiences in making slime.

During this activity the children were able to practice the following skills of communication and taking turns. They were able to use their memory/recall skills by sharing what role each substance played in the creation and were able to vocalize their ideas reflecting back on their past experiences. The smiles on their face when they were done showed that they had a sense of pride in their work. This experiment was not only fun but successful too! 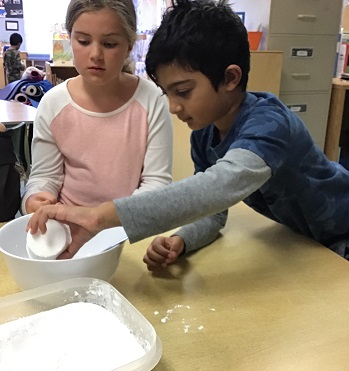