Since it is the month of October our School-age 3 children decided to make pumpkin cookies. Sebastian develops his numeracy skills by using a one cup measuring cup to measure four cups of flour.

Logan said, “That’s a lot of flour for just cookies.”

William then replied, “Well everybody needs to get some even if they are not helping.”

After that the children took turns using a teaspoon to measure the salt, ground cinnamon, ginger, and baking powder. When it was time to add the nutmeg the children were given a whole nutmeg.

Hailey said, “I have never seen something like that before.”

The children decided to smell the nutmeg when Emily said, “It smells like cinnamon but I am not sure.”

Then Sebastian shouted, “I know it smells like nutmeg. I know because my dad uses nutmeg when he bakes.”

Amelia asked, “How are we going to put the nutmeg into the cookies when it is so hard?” The children were then given a grater to use.

Hailey said, “I want to try and grate the nutmeg.” While she was taking some risk by using the grater Emily gave her some words of advice by saying, “You have to be very gentle because you don’t want to grate your fingers.” After Hailey had a turn to grate the nutmeg, some of the other children had a turn.

When it was Aiden’s turn he said, “The nutmeg is very hard to grate.” Eventually we were able to grate enough nutmeg for our cookies. After the dry ingredients were measured and mixed together it was time for the wet ingredients. First the children measured the brown sugar then they added the margarine and pumpkin. Emily then carefully cracked one egg into a bowl and added it to the mixture.

When it was Sebastian’s turn oops, some of the egg went on the table he said in a timid voice, “What are going to do we do not have any more egg, I am sorry.” Amelia then added, “What a mess.” Sebastian was then reassured that it was alright and we will just clean the mess up and our cookies will be fine with a bit less egg. The children then continued with the mixing and stirring.

Aiden then said, “It smells really good, I wish I could eat some right now.” Amelia turned to him and said, “Well you need to wait until the cookies are baked.”

They chocolate chips were then gently folded onto the batter. The best part was when we all had a few chocolate chips to enjoy. With that the children scooped the cookies onto a baking sheet and they were ready for the oven. 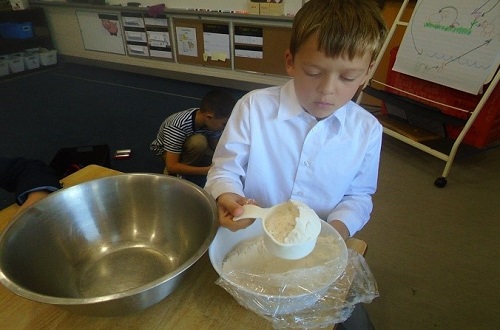 The children did some risk taking, turn taking, cooperation and oral communication by sharing ideas, making comments and asking questions. They develop numeracy skill counting and measuring, all while having fun. 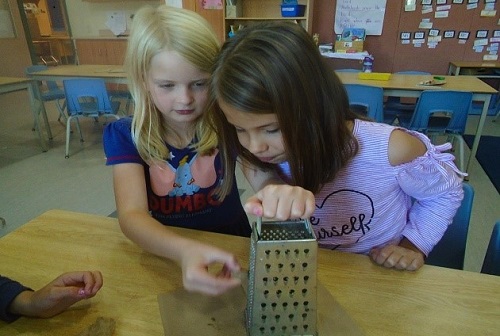 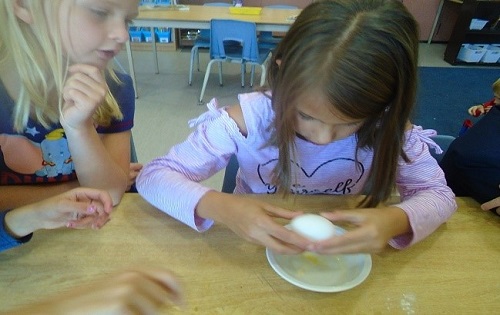 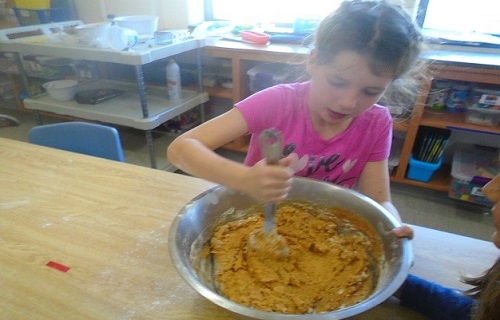