We read many different books in our preschool room, and one of the books that the children have really showed an interest in is the book Chicka Chicka Boom Boom by Bill Martin Jr. and John Archambault. A few of the children recognized the book from reading it at home, and others quickly caught on to the book’s catchy rhythm and the song that goes along with it. They began shouting out and pointing to the first letters of their names as we went through the book, and the children who were unsure of their letters would eagerly ask “where’s my letter?”

Observing the preschoolers’ reactions and questions to this story inspired us to build off of this interest in order to help them learn literacy skills in a way that was meaningful to them. We did this by creating a felt coconut tree and alphabet letters for the children to explore and interact with during free play. In addition to alphabet knowledge, the children demonstrated and built upon skills such as matching, narration, collaboration, expression, problem solving, memory, creativity, critical thinking, and so much more.

The first action that many of our preschoolers did as they explored the tree and letters was search for the first letter of their names. Some of our older preschoolers were able to independently find all of the letters that make up their name, and worked to figure out the order that their letters go in. “Nope, that’s not my name” said Miles as he pointed to the correct letters of his name but in the wrong order. He focused as he pointed to each individual letter while naming them out loud, and rearranged them until they spelled his name. They also showed an interest in learning to identify letters that they were less familiar with, and offered to assist other children to find their letters too. “I’ll help Cece find her letters. What are her letters?” offered Eloise. Many of the children sang and acted out the storyline of the book as they walked the letters up the trunk of the tree before sticking them to the top. “They are dancing up the tree” explained Meredith. “Skit skat scoodle doot, flip flop flee” sang Mimi. Gregory said that “the tree needs to stand up” as he used one arm to hold the tree in the air and used the other hand to add letters to the top. “It’s going to fall soon” he explained.

Another observation that we made was the children matching the upper case letters to the lower case letters. They used the hard copy of the book as a resource during their play, as they took turns flipping through the book and matching the felt letters to the letters on the pages. The back of the book contains all of the upper case and lower case letters in alphabetical order. Joshua pointed to each letter as he recited the ABC song. Addilyn pointed to the A and said “A for Addilyn”. Louisa matched an upper case O with a lower case o. “That’s my letter” noticed Olivia. A few weeks ago the children engaged in an activity involving finding and cutting out the letters in newspapers to spell their names and glued them onto a poster on the wall in our classroom. Meredith used this poster as a guide to finding the felt letters that make up her name and added them to the coconut tree.

In addition to the letters in their own names, the children began identifying, making connections, and asking about the letters of their friends, family members, stores, toys, and other aspects of their life that were meaningful to them. “F for Foxy” said Joshua as he held his stuffed animal fox. “M for mommy” said Liam. “Hey that’s Nana’s letter! Can I take it home and give it to her?” said Meredith. “W for Walmart” said Van. “Where’s Nixon’s name?” he asked of his older brother.

We expanded this activity into an art experience as the children had the opportunity to construct their own coconut trees to take home using construction paper, glue, and alphabet letter stickers.

We are excited to continue to explore literacy in fun and purposeful ways, as our preschool children develop an awareness for letter names, sounds, and shapes that will help to lay the foundation for early reading skills. 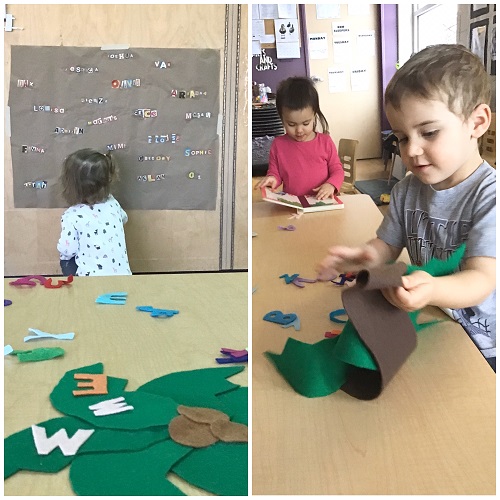 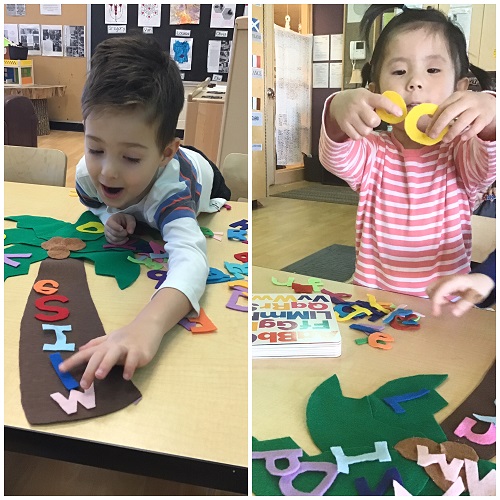 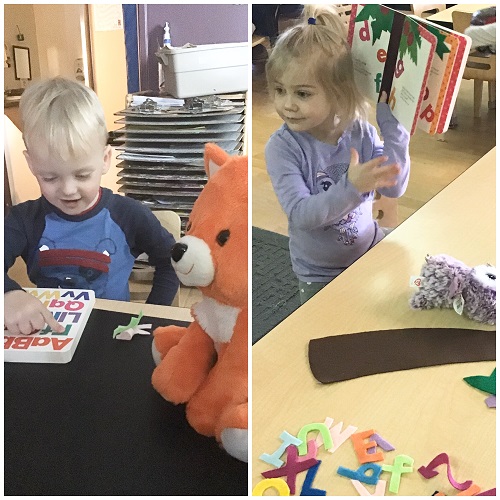 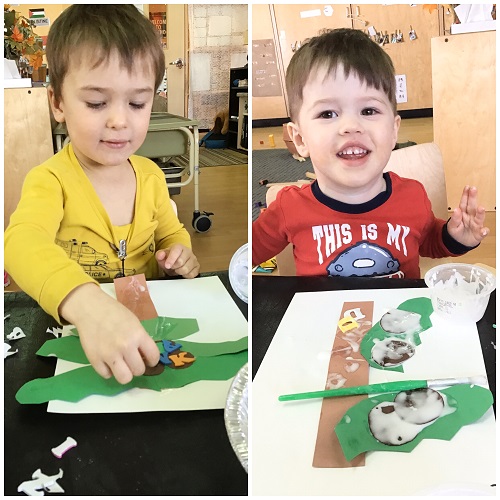