One morning outside on the playground, the toddlers were introduced to an old fashioned apple peeler. They were very eager to investigate and take a closer look at this tool, wondering what exactly this mechanism was used for. As the educator held the apple peeler and identified it by its name, pointing out its different parts, which included the base, blade, handle/crank and spiral like drill, the toddlers appeared to become more and more engaged in what was happening. Before they could get a closer hands on experience with the peeler, the educators talked about the safety rules and what the purpose of this tool is used for.

Where do you think the apple should go? The educator asked.

“Right there!” said Ewan pointing to the front of the peeler where the spikes were sticking out.

“Let’s try” said the educator and with a little push the apple’s flesh pierced through the spikes.

“What should we do now that the apple is on the peeler?” asked the educator.

“We turn it now” said Sam reaching out and grasping onto the handle.

The educator smiled and nodded her head in agreement. She then explained further, that the spikes hold and rotates the apple in place, as the handle is being turned. This action or cranking of the handle, causes the apple to rotate around and around. At the same time as the apple is being turned in a circular motion, it is being pushed against a blade that is located on the side of the apple peeler, which peels away the apple’s skin. The toddlers stood anxiously as they watched the educator demonstrate the turning motion of the handle. As the apple was being peeled, the skin of the apple looked very thin almost like spaghetti noodles which Sam described them as being. With that observation in mind, the toddlers were then encouraged to try the thinly cut apple peels and were asked to describe what they tasted like.

Sam, “It’s not a noodle, it’s an apple!” he said laughing.
“Apple!” agreed Jake nodding his head as he finished eating the rest of his apple peel.
“Every part of an apple can be used for many different things. We can cook and bake with them. But they can also be used for making juices or as a food for other animals, like squirrels, raccoons, cows and pigs. We can even paint with apples” said the educator.

Now it was time for the toddlers to have a go at the apple peeler and use their hands and arm muscles to turn the handle. While they waited for their turn we talked about all the delicious foods that we can make with apples.

“Red one” said Lia pointing at the apple chart that they had created the day before.

Once all the apples had been peeled, and all the toddlers had the opportunity to work with and manipulate the tool, the apple was removed from the spikes, and the result was a spiral-like slinky form with no core. After the peeling process had finished, we observed that the apple held its shape. Leaving the apple still round like a circle and inside where the core was removed, we saw another smaller circle. All our hard work and elbow grease paid off, we were able to enjoy the delicious and nutritious apple snack. 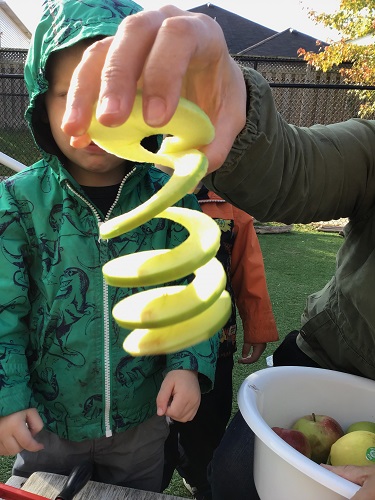