This week many of the children have been quietly engaged in using the looms to knit small hats, neck warmers and scarves. This morning Tim had the opportunity to use one of the small looms but needed some helpful guidance to get started.

Tim- “How do I start it?” Holding up the loom and the thick silver string he chose.

Jonte- “Ok, so, you start here,” taking the loom and wrapping the string around the loom. “Keep going, keep going, around and around, and I’ll leave you here and you just keep looping it around.” Jonte handed Tim back the Loom

Tim- “Oookaayy…” Tim did exactly what Jonte had taught him. However, the string was too thick for the loom and just kept falling off.

Tim- “What do I do if it comes apart?” Holding up his loom to Jonte.

Jonte- “Push all these down.” Tim followed Jonte’s instructions, “yup all down, then I’ll tell you the next step after.”

Jonte- “A knot on the top or bottom?” Jonte put down his own loom and began to watch Tim work on his loom more closely. “Did you get to the second part?, now push down again.” Jonte then reached over to hand-over-hand help Tim. “Then loop the bottom over the top.”

Tim- “It just keeps coming off or falling apart.” Tim held up his loom, it clearly wasn’t staying in place on the loom.

Jonte- “Yeah, this string is hard to use, can I try?” Jonte took the loom from Tim and with some difficulty, he began to slowly loop the thick, silver string around the loom.

Jonte- “Do you want to start over?” 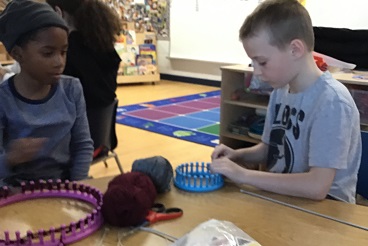 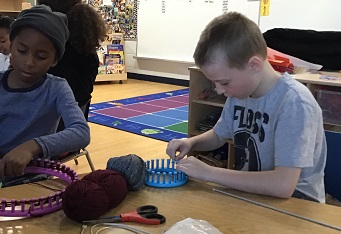 Jonte supported his peer by  providing Tim his full  attention, expressing his instructions clearly and respecting Tim’s inquiries. Tim represented the sense of belonging, as he was comfortable asking for help  and seeking a solution with the challenging string . Both children also developed their sense of well- being, as they became aware of their own feelings during the experience. For example, after Tim had chosen a different string, he picked up the old one, put it back in the bin and said, “that string is very frustrating to use.” In the end, Tim was very satisfied with the new string he chose and Jonte focused on his loom while being sure to check in on his friend. 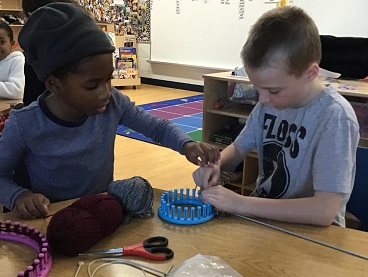 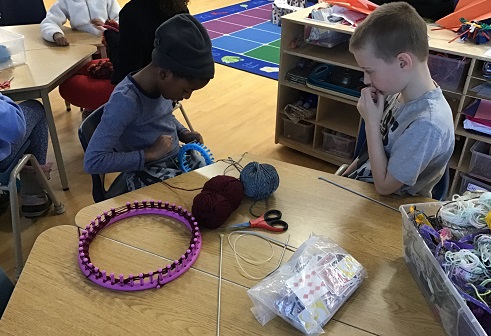