Their imaginary play continued into the classroom and they took turns being the giant. Fee, Fi, Fo. fum, exclaimed Sam. “Ah the Giant”, Kane shouted as he ran away. Lisa  had recently brought in some story telling resources,  after the children tidied up, Kelley used Jack and the Beanstalk pieces to tell the story. The whole entire class gathered on the floor and listened to Kelley tell the story. Cole, Logan, Brady and Adelyn wanted turns sticking the story pieces on the wall. Kelley asked questions throughout the story to engage the children’s listening skills. 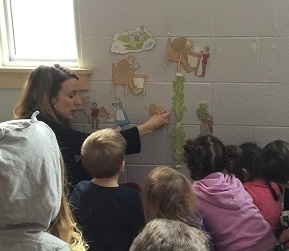 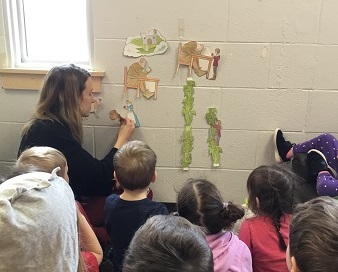 To expand on the children’s interest with Jack and the Beanstalk, we will grow our own beanstalks when the weather starts getting warmer. We will stalk with sprouting Lima beans in zip locks bags on the window. Once those start to sprout, we will transfer it into a cup with soil and measure how big our bean stalks grow.