In the past month, Group 1 has sparked their imaginations and created beautiful pieces as they painted with fly swatters or homemade stress balls (panty hose filled with lentils, tied in to a ball). During the activities the children appeared to be very excited in mixing colours and creating new colours, which gave Wendy an idea to expand the children’s interest in colour exploration with a mess-free paint-smashing activity. Wendy brought paper plates, clear wrap and 6 different colours of paint. Each child got a plate of the colours of their choice and, after Wendy sealed the plates with clear wrap, the children were encouraged to smash or press the paint on their plates.

“It feels slimy,” Aurora said to Wendy as she curiously poked the paint with her forefinger. “The colour is changing,” Nicky shouted, “Look this Marcus!” He then started smashing the paint to make the colour change faster. His voice drew Lila and Marcus’s attention and they began smashing the paint on their plate as well. “It’s so cool. The colours are mixing together!” Lila exclaimed excitedly. The children couldn’t move their eyes away from the plates. Using their observation skills, they noticed something else happening on the plates. “Oh Marcus! I found purple here!“ Nicky couldn’t wait to show Marcus his plate. Wendy asked him how it turned purple. He looked down at his plate carefully and replied, “Um...I think it’s because the pink and the blue are mixing together.” He kept exclaiming delightedly, “Yes! This part is getting orange now.” Nicky seemed to be eager to create more colours. Marcus then came up with a great idea, “Let’s make a rainbow plate!” Wendy asked them how we make rainbow plates and Marcus said, “We will have to smash it harder so we can make more colours.” “A rainbow has a lot colours,” Nicky added. 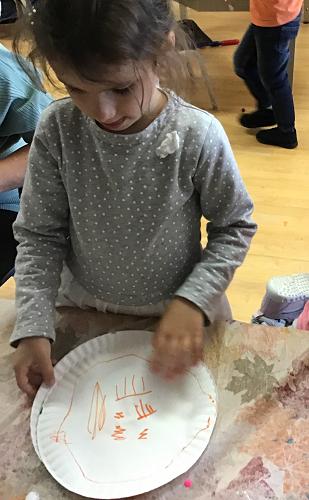 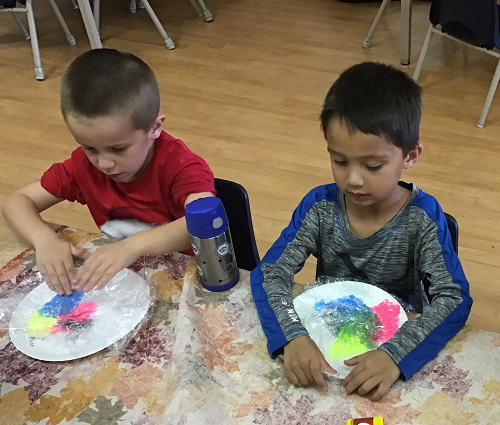 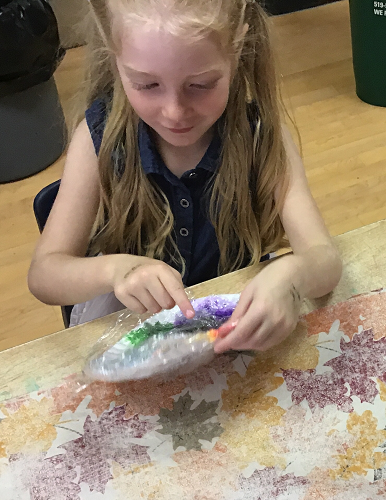 As Nicky and Marcus were busy creating rainbows on their plates, Lucas and Cadence were focusing on their own experiment. “I want to mix orange and blue and see what colour it is gonna be,” Cadence said as Wendy gave her another plate. She asked Wendy to give her a lot blue paint and a little bit orange in the blue. While smashing the paint carefully, Cadence studied the paint. “It’s getting dark blue!” she declared, “this is so cool! I am going to make one for mommy, one for daddy, and one for myself.” Cadence then started concentrating on achieving her goal. Lucas tried to smash the blue paint as hard he could. Wendy asked him why and he explained, “I want to make the blue bigger because I am making the ocean on my plate.” What a beautiful idea Lucas!

Looking at how the other children were creating with their plates, Maya and Isaac decided to participate in the activity. They took initiative to squeeze the paint bottles as well as use markers to decorate their plates. Isaac was so obsessed in creating plates of different patterns that he didn’t want to go home when his mom was here. Luckily, Isaac’s mom stayed for him to finish his last plate. “This is for you.” Maya said to Isaac’s mom with a proud smile on her face.

The children were highly engaged in making different patterns and colours on their plates and were very interested in observing the process of how the colours started mixing together and changing. The activity allowed the children to play collaboratively as well as share their thoughts and ideas, demonstrating their communication skills as well as social skills, which created a sense of belonging in the program. The children’s natural curiosity of science encouraged them to use their inquiry skills to explore how and why the colours changed. 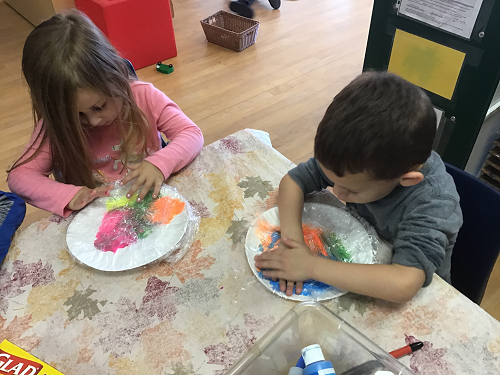