The children in SA1 have been providing us with questions for our Cinematography project. Nicky asked, “How do they make the characters?” which led us on an adventure of trying to reach out to George Lucas.

Learning through project approach allows us all the opportunity to learn more about a topic by researching to the best of our ability to provide a deep understanding on a topic. In order to do this, we wanted to take a chance to hear from the creator himself, George Lucas. We knew it would be a long shot, but you don’t know until you try!

We began by talking to the children about George Lucas. The children misunderstood the first time and thought his name was Jordan Lucas – Lucas and Jordan were so excited! Each day that we would ask, “Who wrote Star Wars?” Lucas would eagerly call out, “Lucas! Um, Jordan Lucas?” Jen explained that we would be writing George Lucas a letter to ask him Nicky’s question, as he would be the best person to explain how he created the characters. She asked the class if they had anything else they would like to ask George Lucas. Tyler wanted to add on, “How does Kylo Ren become good?” and Alex asked, “Why is Rey’s lighstaber golden?” We found out from Alex’s dad that question has been on his mind since seeing the last Star Wars movie. This made us hope even more that we would hear from George Lucas!

The children who wanted to participate in writing the letter were asked to come and sit with Jen. We began with a rough copy and then a few days later used a large piece of chart paper to write our letter. Tyler sat with Jen as she transferred everything over, asking what she was writing and offering to spell words for her, such as “what, who, the.” When the letter was finished, the children were invited to sign their names if they wished. Tyler, Alex, Lucas, Isaac, Lila, Nicky, Natalia and Cadence ran over and waited their turn to sign. We talked about how signatures go at the bottom of letters so as not to confuse the reader.

The letter was folded up, an envelope and postage purchased, an address found for Lucas Films – George Lucas does not want to be found – and we were ready to mail! We were lucky to have a beautiful sunny day to go for a community walk to mail our envelope. Aurora was our letter carrier as we took a poll for which mail slot to use. The children voted and off our letter went. We truly hope to hear back from George Lucas but are also prepared to find our answer another way. Jen took a picture of our letter and reached out on Twitter to give us better odds for a response!

This activity gave the children a different perspective of how research can be conducted. They were quite curious about writing and mailing a letter and were able to practice their literacy skills in the process. We added some new vocabulary for our project with the introduction of George Lucas and hopefully instilled the idea that some questions require patience for an answer – not everything can be found on the iPad. 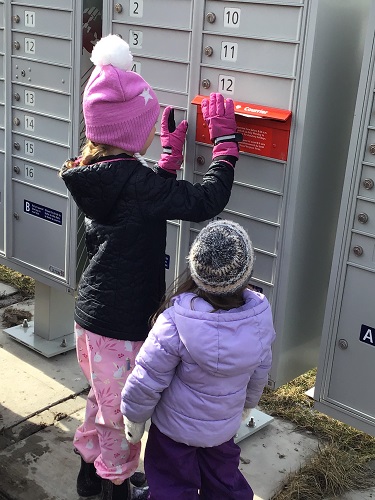 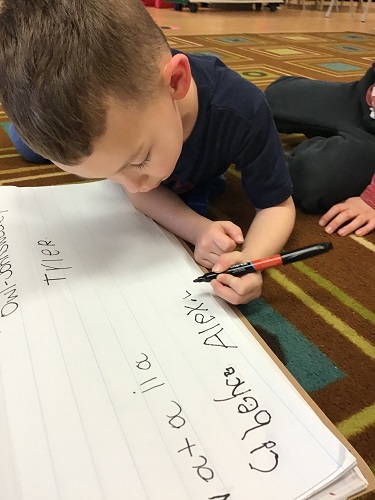